BRONX, N.Y., October 23, 2019 – The Bronx Brewery today announced an upcoming trip to Malmö, Sweden to celebrate the opening of  a new ‘Bronx Burgers’ location, where it will bring some of the Best of the Bronx to the country that gave the borough its name.

The trip marks a step forward in the partnership between the Bronx Brewery and Bastard Burgers, one of Sweden’s fastest-growing fast casual restaurants.

After launching the partnership earlier this year – which features Bronx Brewery beer at all Bastard Burgers locations – both teams embarked on a Summer Tour across four Swedish cities. That trip saw the debut of Big City Bastard, Bronx Brewery’s collaboration IPA, available only in Sweden.

“The minute we met the Bastard Burgers guys, we knew they were about the exact same things we are,” said Bronx Brewery president Damian Brown. “Their attention to quality, team culture and clear communication of values and purpose in everything 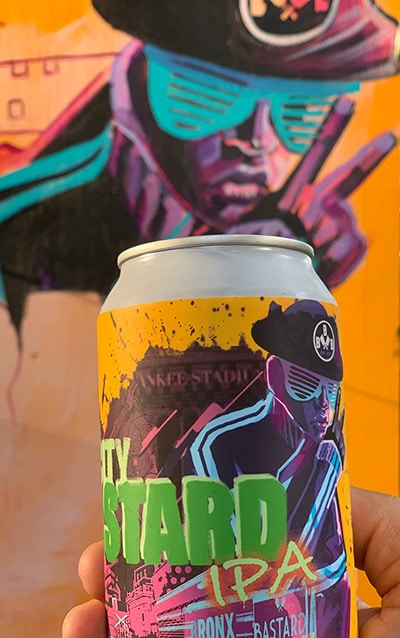 they do.   It’s been a perfect fit from the start, and we couldn’t be more excited about being able to work with them on literally getting our world-class beer around the world.”

This time around, The Bronx – the borough whose name derives from Swedish-born settler Jonas Bronck – takes center stage.

The newly named restaurant will be the first restaurant under the Bastard Burgers family to be called ‘Bronx Burgers.’ To celebrate the occasion, Bronx-based streetwear line Perico Limited, food innovator Empanology and rising-star rapper Denzil Porter will join the Brewery on the trip.

New York artist Demetrius Felder, who designed the label art for the Bronx Brewery’s Big City Bastard IPA – available only in Sweden – also hand-painted 10 custom pairs of Nike Air Force 1’s with a design that references both Sweden and The Bronx. The shoes will be given away to fans throughout the tour.

“What’s happening in The Bronx right now is unlike anywhere else in the world,” said Brandon Espinosa, GM of the Bronx Brewery Taproom & Backyard. “You can feel the energy everywhere. It’s a rising. I went for the first trip to Sweden, and you could see the love and appreciation for The BX. So this time, we’re thrilled to be able to bring even more of The Bronx to its fans.”

Felder joined the Brewery on the initial trip, where he live-painted the Big City Bastard label design at each opening event. He’s also part of the Bronx Brewery Up and Comer Series, which pairs up limited-release beers with rising-star artists.

The journey will be covered on @TheBronxBrewery social channels.

Posted in Events, In the News

Hey Guys – with the extremely historic connection of The Bronx to Sweden (hello? Jonas Bronck.), there’s no mention at all? There’s no other borough on NYC named for an actual person. Come on!