THE BRONX, N.Y., November 5, 2019 – DESUS  & MERO on SHOWTIME and The Bronx Brewery today announced that the iconic Bronx comedians, Desus Nice and The Kid Mero, and their home-borough brewery will collaborate this fall on the launch of a limited-release lager.

Named Bodega Boys Beer after their wildly popular Bodega Boys podcast that put The Bronx-born duo on the map, the collaboration will be an easy-drinking and light-bodied lager with a refreshing, crisp flavor at 5.5% ABV. 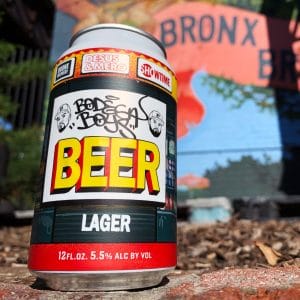 The limited-edition lager will be available in 4-packs of 16 oz. cans at The Bronx Brewery’s Taproom & Backyard, located at 856 E. 136th Street in the Bronx. To celebrate the launch, The Bronx Brewery and the late-night show will host an exclusive event at the brewery on November 15.

“We proudly state on every one of our cans that Bronx Brewery beers are Made By A Team, and few people represent this better than Desus Nice & The Kid Mero of DESUS & MERO,” said Damian Brown, co-founder and president of The Bronx Brewery. “They became heroes to the borough and New York City at large by bringing The Bronx to millions, with a sense of humor and style all their own. We’ve been fans from the start, and we’re excited to brew a beer with them that captures the same no-frills approach that they’re famous for.”

Find out more about The Bronx Brewery’s full lineup of beers here!

About DESUS & MERO
DESUS & MERO airs Monday and Thursdays nights at 11 p.m. ET/PT from New York City on SHOWTIME. It features popular TV and podcast personalities Desus Nice and The Kid Mero speaking off the cuff and chatting with guests at the intersection of pop culture, sports, music, politics and more. To learn more about DESUS & MERO, visit SHO.COM, follow on Twitter, Instagram and Facebook and join the conversation using #DESUSandMERO.

About The Bronx Brewery
Founded in 2011, The Bronx Brewery is a craft brewery based in New York City’s South Bronx neighborhood. The Bronx Brewery team prides themselves on producing what they call ‘No-Nonsense Ales’ – assertive but approachable, innovative but true-to-style beers. Visit www.thebronxbrewery.com or @TheBronxBrewery on social to learn more, or visit their taproom at the brewery at 856 East 136th Street, Bronx, NY 10454.

Are you able to ship this anywhere?