Caution: This beer may cause dancing 💃

For the last two years, we’ve collaborated with The Salsa Project on a beer called El Condado de la Salsa. The style of the brew has changed – it’s previously been a golden ale and then a light lager – but the goal has remained the same; using beer to support The Salsa Project’s mission to keep the culture of Salsa alive in the Bronx.

This year, we’ve changed up the recipe again making it a hazy IPA, but sticking to the same fruit-forward, tropical fruit additions of passionfruit, lime, and coconut. At first whiff you’ll get bright citrus and a burst of passionfruit, mellowed out by a creamy coconut finish. Citrus-forward hops enhance the fruit flavors and keep the bitterness low, creating an easy-drinking, get-on-up-and-dance kind of warm weather refresher.

And according to The Salsa Project founder, Brandon Espinosa, the beer is also a direct connection to the culture of Salsa.

“We thought through each detail that makes up the beer with the goal of making a connection back to Salsa’s roots in Africa, The Caribbean, and The Bronx,” he said. “Everything from the name of the beer to the adjuncts to the community inspired artwork allowed us to create a beer that is truly meaningful and tasty.”

Digital illustrator and social media strategist for The Salsa Project, Melanie Espinosa created a label inspired by a younger generation of the Salsa community.

“I was lucky enough to create the past two can labels for The Salsa Project and each depicted a different story, specifically around culture,” she said. “This time I wanted to highlight the people, our community. My design shows the younger generation who still has an appreciation and love for the music.”

Founding The Salsa Project in 2018, Brandon set out with a “mission to protect, preserve, and ensure that Salsa music does not die amongst the younger generation.” Through events, documentaries, merchandise, and an online presence, The Salsa Project works to preserve culture and traditions.

“Each year we are grateful for the opportunity to collaborate, create, and think outside of the box when it comes to making something that embodies the rich and artistic culture of the Bronx,” Brandon said of the ongoing collaboration entering its third year.

With this year’s release, The Salsa Project has also elected to benefit The Mercado Project. Named after salsa legend Ralph Mercado, it was started by his daughter Damaris to raise awareness of Ralph’s legacy, highlight cultural literacies from Afro-Latinx experiences, and inspire people to explore their own cultural histories.

Melanie Espinosa is a self taught illustrator and New York native. Her work is centered around advocacy in the BIPOC community, motherhood and culture. 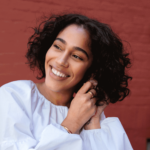