View cart “Señor Lechuga .136 Hot Sauce, With Que Fuego Saison” has been added to your cart.

A Tribute to the Legends of the Game. 🏀

You’ve heard of LeBron, Steph Curry, and even Shaq. But have you ever heard of Wild Willy Kane?

On the brew floor, we have an electronic arcade basketball game called a Pop-a-Shot. And around the brewery, our very own Will Kane is well known as the Pop-A-Shot champ. He’s potentially Guiness World Record breaking good.

So when we were trying to decide on a name for our take on an old school West Coast IPA that showcases a few of our favorite hops, “Hop-a-Shot” just magically popped into our heads.

Big hop flavor bounces out of this can with dank pine and citrus notes from traditional West Coast hops Altus and Cascade, but is balanced out with a little sweetness from the addition of pilsner, 2-Row, and caramel malts. The numbers in this recipe are also significant as they’re a nod to a few famous basketball players throughout history. 8% ABV – 8 for Kobe Bryant. 100 IBUs – 100 for Wilt Chamberlain’s 100 point game. And we did two 23 lb dry hops during this brew – 23 for Michael Jordan.

Sports illustrator Peter Richter (@floppyaction) lent his talents to the can art – which features Wild Willy in his element on the right hand side of the can. Look closely and you’ll spot a few other easter eggs as well.

More On Up and Comers >>

You can also find Bronx Brewery beer for delivery with our online retail partners (availability will vary based on location):

Peter Richter is a freelance graphic designer/illustrator specializing in portraits based around sports. Peter has previously worked with the NBA, WNBA, the New York Jets, and his work has even appeared on Drake's Instagram. 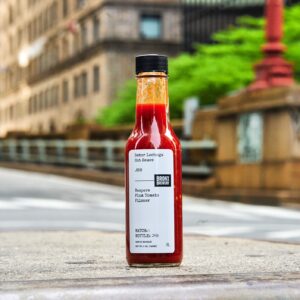