A West Coast IPA that’s ready for its close up!

Well, not really, but Super Eight is a bold, eight percent West Coast IPA brewed with rye malt to add a little bit of spice!

We’ve used the traditional West Coast hop Centennial for big pine notes and hits of citrus alongside Chinook which provides much of the same flavor with added herbal notes. A dry hop of Altus adds spice to the beer’s aroma.

Caramel malts lend a hint of malty sweetness up front, then comes the spiced rye flavor, and then a little bit of Chocolate Malt to create a smooth finish.

Obviously the name Super Eight is a nod to the beer’s 8% ABV, but it’s also a reference to the film format Super Eight.

“[Super Eight film] is as raw as possible. It is what it is, you get what you get, you can’t really manipulate it,” said our September Y-Series artist, Bronx filmmaker and director, Elyssa Aquino.

“It’s one of my favorite platforms of film making because it forces you to think about every shot,” she said.

The raw nature of Super Eight film also acted as an inspiration for Elyssa’s design of the can label. Starting with a mood board, Elyssa developed a scrapbook style image of elements that make her who she is – with an emphasis on her home the Bronx and being a female director through incorporating imagery connected to her first film, Secadora.

Secadora is an alternative kind of love story focused around the blossoming relationship of Afro-Dominican couple Cynthia and Laura who end up in a heated argument over race after Laura’s suggestion that Cynthia straighten her naturally curly hair.

“I would hope that the message of this film would touch on the lack of tolerance that exists right now when it comes to conversations about identity. For me, it’s not supposed to be black or white. I want people to understand that both the characters are still good people. Neither is necessarily right or wrong, because it’s such a complicated thing,” Elyssa told Popsugar last year.

Writing movies since she was a kid, Elyssa always knew she wanted to be a filmmaker, she just didn’t realize how much her own heritage would come into play when she was writing.

She hopes that putting her own community on screen empowers other women of color to join the film industry.

“There’s power in seeing yourself in a movie or seeing someone who looks like you making a movie,” she said. 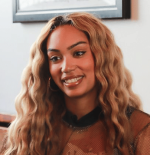