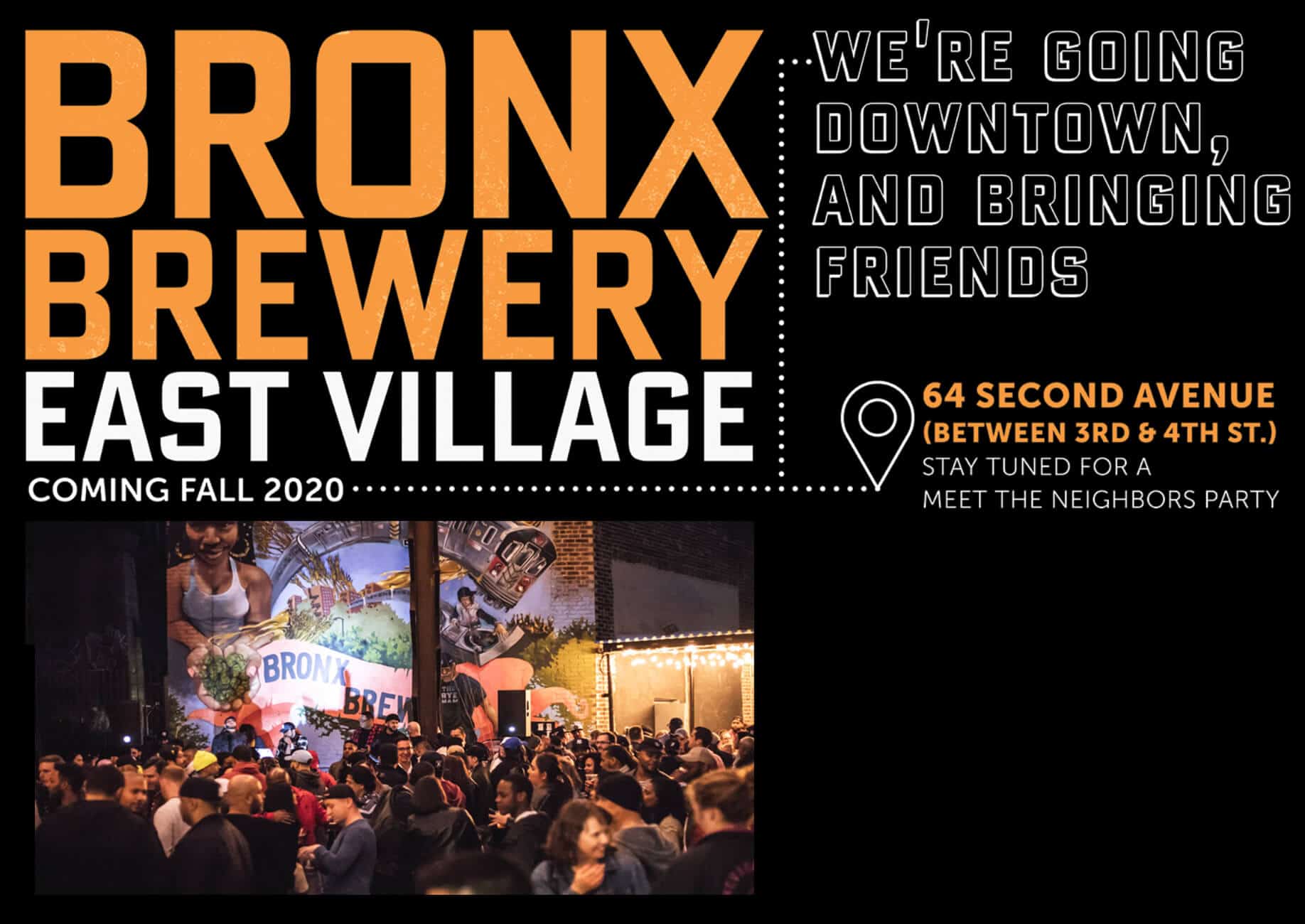 THE BRONX, N.Y., March 11, 2020 – With its ninth birthday on the horizon and its Taproom & Backyard in the South Bronx coming off a record-setting year, The Bronx Brewery is heading downtown. And bringing friends.

The brewery announced today that it will expand to a second location this fall, launching a pilot brewery, taproom, kitchen and music venue in the heart of Manhattan’s East Village. Located at 64 Second Ave (between 3rd & 4th St.), The Bronx Brewery East Village will combine limited-release brewing, the brewery’s signature events, art & music from rising stars across NYC, and a special guest in the kitchen.

The space will bring the brewery’s goal of building community through a diverse, creative and inclusive environment to an iconic neighborhood long known for its creative energy.

“Our goal has always been to create amazing beer – but it’s never been just about the beer itself,” said The Bronx Brewery president and co-founder Damian Brown. “We believe great beer can bring people from all walks of life together, and it’s a privilege to see that happen every day in the South Bronx. We’re excited to share so much of what makes our culture special with a new part of the city.” 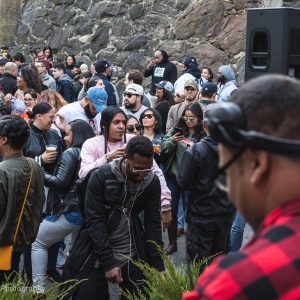 The pilot brewery system will dramatically expand the Brewery’s Up and Comers creative series, with more frequent releases, a more experimental range of styles and boundless opportunities for collaboration. Now in its third year, the series has produced some of the brewery’s most popular beers while also providing a platform for rising-star local creatives. Beginning with label design, the series has grown to include music, murals, food and more.

The Bronx Brewery East Village will be designed as a communal space, no matter the time of day. From brunch to a beer with friends to a night of live DJs, its multilevel layout – including immersive seating in the pilot brewhouse – will feature a variety of ways to engage with the space.

Murals and revolving street art will cover the walls and hi-fi sound will saturate the space, creating a showcase for New York City’s top up-and-coming artists, DJ’s and live acts.

The space will also give the brewery another vehicle to give back to the local community, with the limited-release brew series set to be used as a recurring fundraising platform for community organizations in the South Bronx and East Village. Earlier this year, the Brewery supported Puerto Rico relief efforts in collaboration with Bronx performer Richie ‘Crazy Legs’ Colon, while the Brewery will continue to open its doors as a venue for charitable causes.

In the kitchen, discussions are in advanced stages with a partner that shares the brewery’s values of approachability, creativity and community. More details will be announced in the coming months.

The Bronx Brewery East Village will serve as an ideal complement to The Bronx Brewery’s longtime Taproom & Backyard home on 856 East 136th Street in The Bronx, which will continue producing the majority of the Brewery’s beer, hosting guests seven days a week and working toward fulfilling its goal of creating the most unique, diverse and inclusive events series of any brewery in the country. 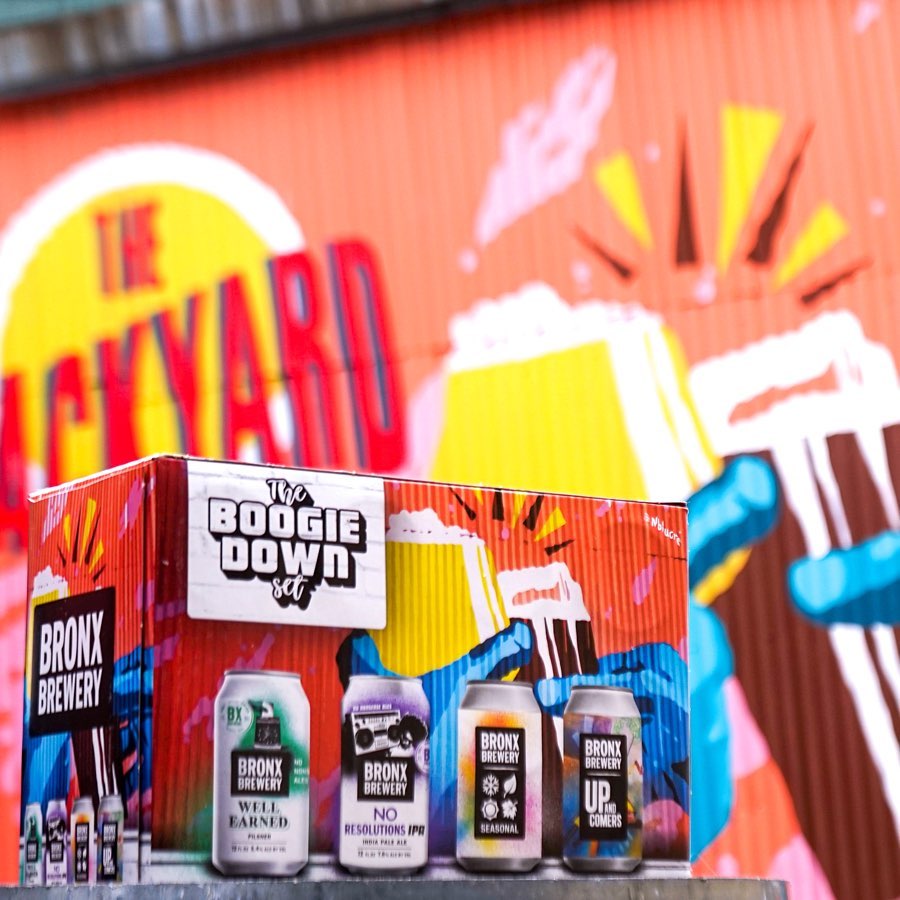 The new brew system will dramatically expand the Bronx Brewery’s Up and Comers series, where limited releases meet rising-star artists. Pictured: The Boogie Down Set, in front of Natalie B. Lucre’s ‘Backyard’ mural.

“We have created a vibrant atmosphere – one that’s inclusive and community-oriented – with beer, music, and art at the center,” said Brandon Espinosa, Bronx Brewery GM of Venue and Events. “We always knew we had something special that made the experience at our brewery different and memorable. We’re beyond excited to bring the richness of our unique culture to the East Village for more people to experience, and look forward to introducing more people to our lifestyle.”

To celebrate the occasion, The Bronx Brewery team is planning a ‘Meet The Neighbors’ party in the raw space before construction begins. Stay tuned for the date, and stop by to have a beer with the team, enjoy music from local DJ’s and kick off the brewery’s new downtown digs.

About The Bronx Brewery
Founded in 2011, The Bronx Brewery is a craft brewery based in New York City’s South Bronx neighborhood. The Bronx Brewery team prides themselves on three principles, infusing everything the Brewery does: approachability, creativity and community. Visit www.thebronxbrewery.com or @TheBronxBrewery on social to learn more, or visit their Taproom, Brewery and Backyard at 856 East 136th Street, Bronx, NY 10454.

Awesome. Been an out-of-town fan from the very beginning. Still wearing my t-shirt from the 1st year celebration that we attended on 136th. Love the original taproom, and back yard, and look forward to the opening in the East Village. Congrats!!!