Named after a Bronx Summertime destination for sunshine and seafood, City Island Sour IPA joined our year-round lineup in August of 2019. Its combination of hops and Sourvisiae yeast create a unique peachy flavor with zippy hints of lemon and lime.

A puckery, tongue-tingly and tart brew, City Island is floral on the nose but makes us think of sour peach rings when we take a sip.

After a few years on our roster, we felt like City Island’s uniform needed a little update so we called in our friend and master graffiti artist, Enoe.

“I feel like sour beers are an acquired taste and I felt the art should be just as unique,” he said.

Using an older painting as a reference, Enoe converted his design to digital for this can piece, using the liquid as his inspiration to visualize the flavors as colors.

“The shapes and colors in the art represent a person relaxing with sunglasses and staring at a radiant star in the sky,” he said. “Let’s just say we want whoever is drinking this to believe they’re drinking liquid gold.”

A. Hernandez aka Enoe is a NYC native and student to the school of graffiti culture who has carefully aimed his approach in art toward graphic design and illustration. 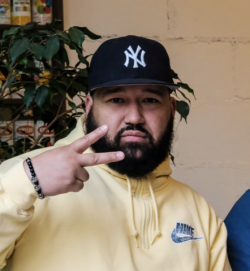 CONTINUE SHOPPING
TAP FOR BEER NEAR YOU

TAP 'SEARCH' FOR LOCATIONS CLOSEST TO YOU