From the brew inside the can to the art on the outside, a lot of love went into this year’s PRIDE release, Habibx – a lot of love and a little bit of smoke.

This refreshing kolsch is slightly sweet upfront and backed by a light, smoky finish from mesquite smoked malt. A balance of slightly fruity, spicy and herbal Sterling and Crystal hops keep this ale crisp.

Multi-medium artist Lafi Melo helped to create Habibx in all its forms – from assisting with the recipe, to creating the can art and the name. Habibx stems from “habibi” an Arabic term of endearment meaning, “my love” with an X added at the end to simultaneously represent both gender neutrality and the Bronx.

Habibi is also a reference to Lafi’s Palestinian roots – something they connected on with their friend and muse for this project, vogue dancer Ridikkuluz.

“I met [Ridikkuluz] when I spoke for Palestine and gender non conforming youth at the Brooklyn Liberation March in 2021,” they said. “[Ridikkuluz’s] vogue performance in a keffiyeh was life changing for me and I wanted to share that feeling. There is a myth that we have to choose between who we’ve been raised to be and who we really are, but watching Ridikkuluz dance showed me the truth.”

Floating around the images of Ridikkuluz voguing in a keffiyeh (a symbol of Palestinan nationalism) are wafts of smoke, a reference to hookah, and the colors of the rainbow inspired by “when the sun hits a patch of water in an open hydrant” also representing the the 2LGBTQ+ community everywhere.

“There’s so much of my heart in Habibx,” Lafi said. “So many cultures live deep in my rib cage and it feels good to let it all out.”

Something else that has a place in Lafi’s heart is the Callen-Lorde Community Health Center. Callen Lorde works to provide safe and comprehensive health care to NYC’s LGBTQ+ community, regardless of ability to pay.

“Never in life had I heard of or experienced such gender affirming care,” they said. “Every single visit I’ve ever had, I was made to feel like my health had the entire team behind it. I believe everyone deserves that experience.”

We at The Bronx Brewery agree, and in support of Callen-Lorde, a portion of the proceeds of Habibx will be donated to the health center.

Lafi Melo is a multi-medium Artist and Educator living in New York; making artwork celebrating and advocating for their communities. Their subject matter is centered on their lived experience as part of the 2LGBTQ+ Community and growing up in a South American and Palestinian household. 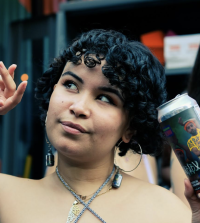